One of the interesting things about sampling and studying the deep ocean is that all instruments and collection devices must continue to operate at great depth.  Electronic packages must be water tight and sensors must survive the intense pressure of seawater up to 5000 meters.  Since pressure increases roughly 1 atmosphere for every 10 meters depth, this is 500 times the pressure at sea level.  One of the best ways to really understand this has become an oceanographers favorite "cruise souvenir" activity.  When a mesh bag containing styrofoam cups is tied to the Rosette, the air is squeezed from the styrofoam at depth and they return as miniature versions of themselves.  We decorated cups for the 4th grade Chase Street Elementary class as part of our NSF outreach and will visit the class with the results.  The pictures below are the "before" and "after" documentation with a couple of Sharpies for reference.  A very interesting way to create a novel expresso cup, don't ya think? 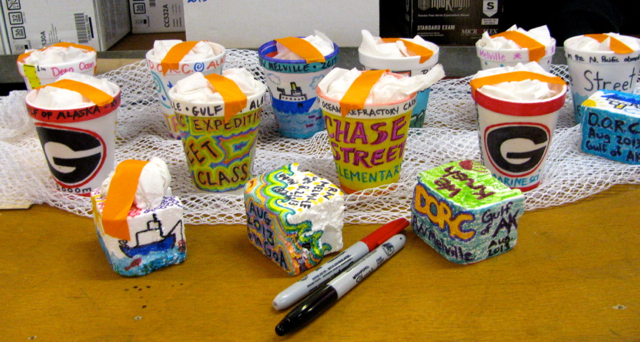 Posted by Unknown at 1:42 PM No comments:
Email ThisBlogThis!Share to TwitterShare to FacebookShare to Pinterest 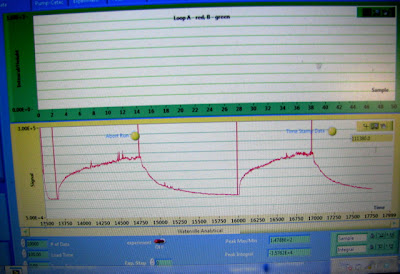 So you may be wondering if we are actually getting any data with all this time and effort.  Of course the answer is "Most assuredly so!"  The picture here is the data trace on the computer screen for one of the photochemical products that we are evaluating for the deep and surface water carbon pools in the Gulf of Alaska.

The red line is the time trace (secs) for the concentration of superoxide in a beaker beneath our solar simulator. The red vertical lines are when the solar simulator is alternatively turned on and off.  As you can see, radiation creates an immediate increase in the superoxide concentration until it reaches a steady state where it's production by sunlight equals its rate of loss due to chemical reactions in the water (it is a very reactive "radical" generated by molecular oxygen in the water picking up an electron from energized organic carbon).  When the solar simulator is turned off, there is an immediate decline in superoxide concentration.  By studying these rates of production and loss, we hope to quantify the photochemical reactivity of the different pools of organic carbon.

OK.  So I went a bit deep on the chemistry there for a while, but it is pretty exciting to see such a clean demonstration of these reactions, that we are measuring in real time at PICO-molar concentrations (that is 0.000000000001 moles per liter of seawater).  All while on a ship in the North Pacific!!  I hope you can appreciate my excitement.

-Bill
Posted by Unknown at 12:24 AM No comments:
Email ThisBlogThis!Share to TwitterShare to FacebookShare to Pinterest

There are two ways to study the role of photochemistry in seawater. Both require comparing dark samples to those exposed to sunlight.  Dark is easy.  Wrap your bottle in aluminum foil and wait.  The sun part can be as easy as setting quartz tubes with your water out on the deck on a sunny day.  But with weather in the Gulf of Alaska  (think about the TV Show, "Deadliest Catch"), depending on sunny days could leave you floating in the middle of the ocean on a VERY expensive research vessel with nothing to do.  Not good.

To ensure a productive photochemical cruise, we are using two Solar Simulators.  These have a constant radiation output from a 1500W Xenon lamp that is similar to the solar spectrum in the energetic UV wavelengths most important for the reactions we study (take a look at the spectra in Leanne's previous post).  The steady output can be as great as 3 times the intensity of noon summer sun which makes experiments go 3 times faster than real sunlight... more experiments = more data = more "bang for the buck" on a cruise... and there are no clouds, nighttime, or other variables that make light hard to quantify. They also allow extremely careful characterization of the photons absorbed by our samples.  From this we can be very quantitative about the rate of photochemical production in seawater. Carbon monoxide, hydrogen peroxide, and superoxide (molecular oxygen with an extra electron supplied by light-activated organic carbon molecules) are what we are measuring this trip, but similar study of other things like carbon dioxide, and other gases need the same defined light field.

Our plan is to develop quantitative comparisons between photochemical rates for the Dissolved Organic Carbon (DOC) in the deep ocean and that found at the surface.  This will help us define the global lifetime of DOC in the ocean, and predict the relation of this huge pool to the pool of CO2 in the atmosphere.  We are generating piles of data with the "Sun" shining 24/7 in our two boxes.  Time and a great deal of post-cruise analysis and thought will let us know what new and important stories will emerge.  We are excited by the prospects.


This morning we stopped at a special station on Albatross Bank south of Kodiak Island, AK.  Jokingly dubbed "Station F" ...  for fishing, it turned out to be a spot that provided some excitement for crew and scientists alike.  Almost every line over the side got a strike, and most everyone that wanted to, caught a fish or two... mostly Halibut and Pacific Cod.  The catch pictured on the deck below is about half of what was caught.  We had fish tonight for dinner, and although the menu below in the galley could be a joke, we certainly caught enough for fresh fish to be around for a while!!

Posted by Unknown at 3:56 AM No comments:
Email ThisBlogThis!Share to TwitterShare to FacebookShare to Pinterest

For relevance, the dissolved organic carbon (DOC) content of the ocean is roughly the same size as the CO2 in the entire atmosphere.  A redistribution of the carbon in this huge oceanic pool (either back to the atmosphere or increased storage in the deep sea), would alter greenhouse warming through a global redistribution of CO2.  As you may suspect, the complexity of the organic carbon cycle in the deep ocean requires a great deal of diverse expertise to collect the data required to make headway for new understanding of processes that explain observed DOC distributions. We have been "living together" now for more than a week... I thought it might be nice to meet some of the others on the cruise. This is not everyone, just those I got a good picture of...  maybe later they can tell what they are working on but now it's 3:30am and I am out of here.  Let the ship rock me to sleep.... zzzz.


Posted by Unknown at 3:26 AM No comments:
Email ThisBlogThis!Share to TwitterShare to FacebookShare to Pinterest

Sunny days in the Gulf of Alaska!

Sunshine- essential for life, and all the reactions we study. In order to study photochemistry in the lab (or on a boat!) we need to control the amount of sunshine in our experiments. We have been doing all of our work here in solar simulators, allowing us to quantify the light dose delivered to our samples--- and speed up our experiments (always good when you want to do a lot of them)!

OWe've been wondering how light in our solar simulators compares to sunlight in the Gulf of Alaska. Lucky for us, the past couple days have been bright and sunny, allowing us to make that comparison. We've been using an OL Laboratories spectroradiometer to take irradiance measurements on 1 nm intervals
(basically quantifying the light dose on a very fine scale). The picture to the left compares the light dose in our solar simulator to that on a sunny day here in the Gulf. The spectrum in our solar simulator isn't a perfect match to sunlight, but it does do a fairly good job of representing a solar spectrum.

Visible light ranges from 400 - 700 nm, so all light below 400 nm is in the UV, and the main driver of photochemical reactions. You can see that a good amount of UV light reaches the earth surface even when cloudy, so mom was right, always wear sunscreen!

--  Leanne
Posted by Unknown at 10:36 PM No comments:
Email ThisBlogThis!Share to TwitterShare to FacebookShare to Pinterest

The job of studying the deep ocean is daunting.  Deep water here in the North Pacific is old... having last been in contact with the atmosphere hundreds of years ago when it sunk in the North Atlantic or off the coast of Antarctica.  It has accumulated chemicals and carbon from sinking particles that have been processed by bacteria along its path.  How do you understand the chemical properties and potential for reactions of water at 4000 meters beneath the sea surface?  Well, simply put, you bring it to the surface and into your laboratory on the ship.  The instrument package we use for this is called a Rosette.

It consists of 24 Nisken bottles that hold 10 liters each.  They are cocked open on deck, descend to depth as a cylinder open on both ends, with the tops and bottoms cocked and connected to "rubber bands." These slam the cylinder shut when fired from the ship trapping water from whatever depth you choose.  It takes about 2.5 hours just to lower the package to 4000 meters, more time to retrieve and we have done this about 25 times so far over the past week.  The cable that lowers the rosette has an electrical connection at its core that both feeds  information on depth, salinity, and temperature (from a CTD sensor on the bottom of the rosette) up to the ships controls, but also will send an electrical signal to the rosette to sequentially "fire" each bottle when it is at the depth selected to capture a deep water feature.  The coordination between the wench operator, the CTD technician, and scientists is complex and many things can go wrong (bottles don't close, bottle leak, etc.) but usually this results in 240 liters of water collected from between 0 and 4000 meters being set on the deck where scientists carefully remove the water through a small nipple on the bottom.

The bottles are sealed until the nipple is opened so contamination is limited and extremely small concentrations can be measured.  Other groups on the ship are collecting water to measure oxygen, dissolved and particulate organic carbon, nitrogen, phosphorous, silica, bacterial abundance, organic microgels, bacterial DNA, molecular distributions, and other things.

We are collecting water for photochemical experiments on the ship (...more on that later) and measuring/mapping the optical properties of the water from the surface to the bottom.  The optical properties are important to photochemistry since these reactions are dependent on absorbing the energy from sunlight.  They also track deep water masses originating from different places and traveling to different destinations.  Since we can't see the very slow motion of deep water, chemical and optical tracers let us understand how the water moves at great depth.

Posted by Unknown at 7:35 PM No comments:
Email ThisBlogThis!Share to TwitterShare to FacebookShare to Pinterest
Older Posts Home
Subscribe to: Posts (Atom)